“Through this festival, we want to invite the public about the importance of using non-rice food. Banyuwangi has a variety of agricultural products. Carbohydrate needs are not only obtained from rice and flour. But can be from corn, tubers, vegetables and others. To be more interesting , then we have to be creative in processing it,” said Assistant for Government and People’s Welfare, Arief Setiawan when opening the festival. Acting Head of the Agriculture and Food Service, M. Khoiri added, this event will further increase the benefits of non-rice and wheat food. This, he said, was a campaign to the public that the main food ingredient was not just rice.

“There are still many crops that can be processed. Make people aware that nutrition can come from various other ingredients, so don’t just stick to rice. With good intake of various foodstuffs, God willing, nutritional adequacy can be fulfilled. This also avoids the risk of stunting,” said Khoiri .

In addition to competing for non-rice food creations, this activity was also filled with the launching of non-rice food e-books. The e-book can be accessed on the website of the Department of Agriculture and Food. “In it at the same time users can calculate the fulfillment of the required nutrition,” said Khoiri. 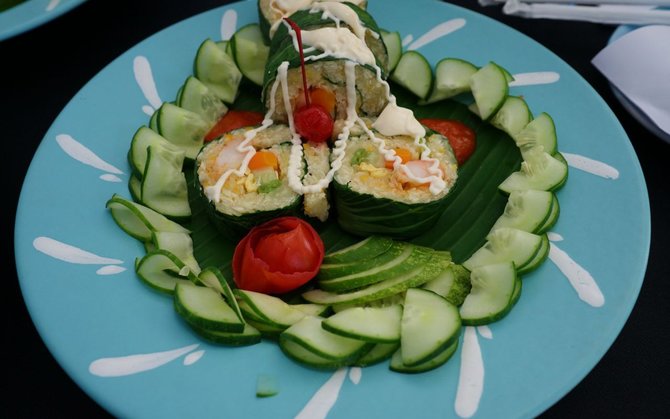 The festival was warmly welcomed by PKK cadres. According to them, the festival which is held regularly every year triggers them to continue to be creative in processing food ingredients that are around them.

“We make monyong taro. Steamed taro is made like a burger, wrapped in banana leaves and then grilled. The side dish is geplek eel, seasoned with spices and added to kecombrang. The snack is milk and corn flour. It tastes good,” said Asmaul Husan, a PKK cadre from Licin District . On that occasion, awards were given to 7 hotels, 3 restaurants and 6 MSMEs that consistently used non-rice food menus in their menu choices.

Pantun of the Minister of Defense at the Opening of the Congress Exactly: Jokowi...

Ministry of Agriculture Builds Embung, Agricultural Land in 3 Villages with...

Pantun of the Minister of Defense at the Opening of the...