This championship was attended by 248 athletes from 27 regencies/cities throughout Java and Bali.

“I am proud that there are many junior fencing athletes who take part in this championship. Make this championship a parameter to measure strength and ability. Have fun competing. Always prioritize sportsmanship. Win or lose as an experience,” said Banyuwangi Regent Ipuk Fiestiandani.

Ipuk said that currently sport has become a lifestyle. That’s what makes Banyuwangi hold many sporting events in the Banyuwangi Festival which is wrapped with sport tourism.

“Sport is not only to maintain a healthy lifestyle and achievement, but also a lifestyle. That’s why we hold a lot of sport tourism that combines sports and tourism,” said Ipuk. “I hope that the Banyuwangi Open fencing championship will be held every year. Hopefully, this event will bring out talented fencers,” said Ipuk.

Meanwhile, Head of the Youth and Sports Agency (Dispora) Abdul Aziz Hamidi, the fencing tournament consists of 20 categories. The category of Floret and Degen Putra Putri for the elementary level, and added the category of Sabel for the junior and senior high school level. 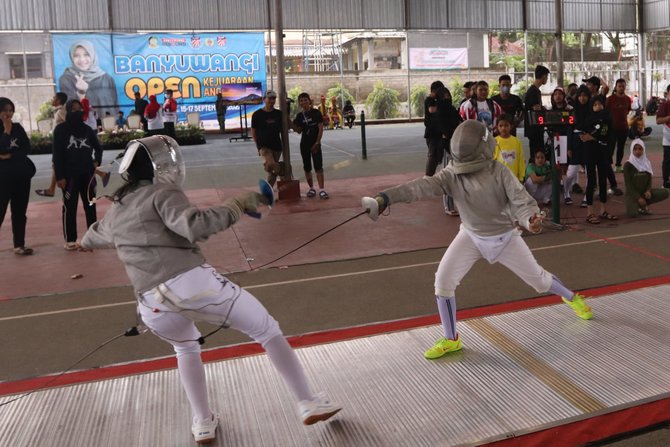 “For Banyuwangi, this is an effort to capture potential new fencing seeds, who are ready to compete in the Provincial Sports Week (Porprov),” explained Aziz.

One of the participants from Banyuwangi, Achmad Dhafir Andriyani, who competed at the high school level targeted to win first place. Achmad, who is currently studying at the East Java Sports State High School through the achievement track, said he was optimistic that he could make Banyuwangi proud. “Hopefully I can give the best for Banyuwangi,” he said.

What is the Law of the Prophet’s Birthday Celebrated Every Year? This is...

Joe Biden: World on the brink of a nuclear apocalypse | merdeka.com

What is the Law of the Prophet’s Birthday Celebrated Every Year?...

In front of Anies, AHY Introduces Volunteers to Support ‘Anies-AHY’ |...

Joe Biden: World on the brink of a nuclear apocalypse |...

Barcelona registers Koundé in the League and distances Piqué from the...